“Ambassador” it’s a Word that means a lot of things. I believe that ambassador means learn, patience, love, friendship, kindness, leadership, organization, administration, service, humility, job, courage, passion, but most of all, want to be different, want to make the difference and help to others to be different.

I should be chosen as ambassador because I’m able to learn, to lose and stand up again, to fight against me and this society, to work with and for others. Because I’m able to be corrected for the life and its twists. Because I’m able to share the few things that I know, but most of all learn from others. Take a small part of each person who crosses my path, to build my role model, my plan of work, my ideal life. I want to be ambassador because I’ve tried to be all the last things, and I’m not yet, so I need share my experiences with others to know what I need. “Who doesn’t live for serve, doesn’t serve for live” I feel so connected with this phrase, because I don’t believe It’s just a phrase, I believe it’s a truth. I want to serve, I want to live, I want to help other people to be passionate, to be 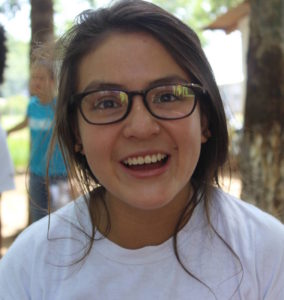 kind, and to be brave, I want to learn how to keep my dreams and help others to keep their dreams too. I want to be part of the change, of that little part of the world who does something, who tries to do something, who shares his thoughts and fight to make them real. But not alone, I want to be ambassador to get new role models, to find people who impacts me. I want to motivate others to be themselves, to shout to the world, to eat this world, to make it there. Always I’ve thought we are like we are, because we don’t have the correct education or we don’t have education.

I’m talking about the human education, we have forgotten what we are, and that we are the same, that we have learn from others, respect other, don’t judge other and share the few
knowledge, love, passion, happiness, courage and energy we have.

The health is one the most important topics for the humans. TECHO, also promotes projects to success in this topic. We did a list of the most priority problems in San Rafael, Villa Canales. When we did that list, we tried to involve to all the community and all the ideas and opinions from the neighbors, and one of the problems was the health. In base to that, we began to think one project to try solve it. We wanted that was something useful for the community. 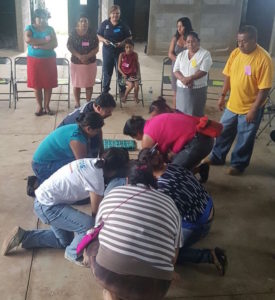 We believe that the best way to make changes is educate. So, we were looking something educative about health. With a group of neighbor women, we began to organize a First Aid Training. It is very important that there are people capable of resolving

emergencies, the nearest health center is not accessible to everyone in the community.

We worked with Glasswing, an organization dedicated to health issues. Our project was to provide a first aid training to people in the community who have some knowledge or work in health. For example, midwives, who did remedies, salves, teas, healers, etc. But if anyone was interested and was not involved in health, it could also do so.

Along with the ladies, we chose a day to give training, the aim of this little training was to arouse interest in learning how to heal ourselves or how to act in case of emergencies, and that the group was trained could train someone else or spread it in your neighborhood. 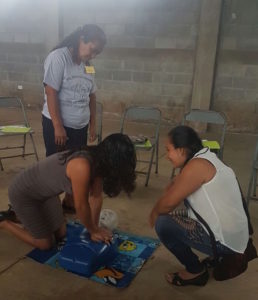 The training was given by two firefighters, we had a group of 16 people from the community and three volunteers. We carry out the activity in the communal lounge. The training was divided into two parts, theoretical and practical. Each with a duration of 1 hour.

The topics discussed were, take the steps to put a person CPR, how to treat wounds and bleeding, such as strokes or immobilize fractures in an accessible manner, using things they had on hand. In the practical part, they were 5 groups and each group was a dummy in which treatment had to simulate CPR, in time of 1 minute. At the end of the training, Glasswing gave a diploma to each of the participants.

The result of the training was very visible, many people came at the end to ask when we were going to bring another, and if it could be nursing as injecting or like putting a serum. The interest in learning, which was the main goal woke up, and is a sign to continue working on the issue, and see in what way we implemented a development.

The second objective, will see as time, to the extent that trainees achieve spread the message .The activity was a success, it would not have been possible without the willingness of neighbors and without the help of Glasswing, we just were mediators , which ultimately, is our goal to empower communities to seek them alone get ahead.

San Rafael, has a lot of fabric to cut yet, this is only the beginning of a great awakening for this community.