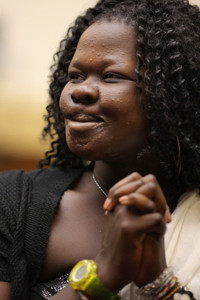 Evelyn Apoko is a Ugandan youth who, at age 12, was abducted from her family at gunpoint by the Lord’s Resistance Army (LRA), the extremist Christian militia movement led by Joseph Kony. The children abducted by the LRA rebels were sometimes beaten, forced to kill, made to steal, sexually abused and treated as slaves. The atrocities Evelyn witnessed were unspeakable. One day, while she was washing clothes, a plane flying overhead dropped a bomb nearby, killing the woman and baby next to her and severely injuring Evelyn’s face.

When the rebels came later to carry the wounded back to camp, they left Evelyn to die in the grass. However, she managed to survive and get back to the rebel camp – only to be ostracized for her appearance. On the brink of being killed by the rebels, Evelyn escaped to a rehabilitation center in Northern Uganda, barely making it out alive.

The center helped Evelyn and other child soldiers like her recover their humanity and identity. They reunited Evelyn with her family, who she thought had been killed by the LRA.

In 2005, Evelyn began a series of trips to the United States to undergo reconstructive surgery on her face. When she returned to the United States for more surgeries in 2009, she connected with the Amala Foundation, beginning a long and impactful involvement with the Austin, Texas based international youth leadership organization.

Evelyn has attended every Amala Foundation Global Youth Peace Summit since 2010, most recently serving as a Counselor-in-Training. She has also attended all three of Amala’s One Village Walks inside San Quentin Prison and has been heavily involved in the Amala year-long One Village Project and Camp Indigo.

“I grew up in a world of bloodshed, fear and tears. Today, I am inspired beyond words and look forward to working with young people and women who are experiencing war, because I want to show them that there is a way to build a world without violence. I strongly believe that no child was born to become a rebel and that we are all teachers for one another. I trust that if we support the next generation to experience the peace that begins within, the peace in the world will follow.”