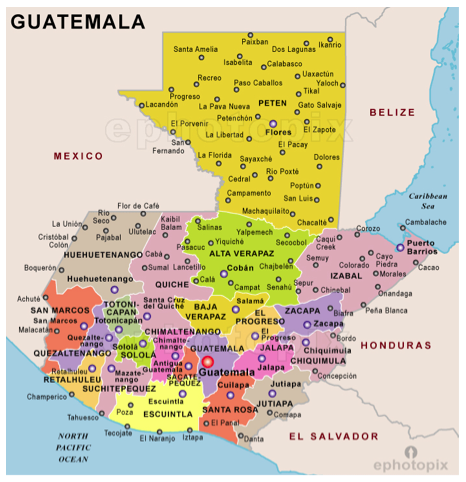 Spanish is the official language of Guatemala

In ancient Mayan culture, the quetzal bird’s tail feathers were used as currency. It is divided into 100 centavos or lenes in Guatemalan slang. The plural is quetzales.

At the time of this writing 1 quetzal = .13 US Dollars

Guatemala is in the Central Time Zone

Guatemala officially the Republic of Guatemala is a country in Central America bordered by Mexico to the north and west, the Pacific Ocean to the southwest, Belize to the northeast, the Caribbean to the east, Honduras to the east and El Salvador to the southeast. With an estimated population of around 15.8 million, it is the most populous state in Central America. A representative democracy, Guatemala’s capital and largest city is Nueva Guatemala de la Asunción, also known as Guatemala City.

The territory of modern Guatemala once formed the core of the Mayan civilization, which extended across Mesoamerica. Most of the country was conquered by the Spanish in the 16th century, becoming part of the viceroyalty of New Spain. Guatemala attained independence in 1821 as part of the Federal Republic of Central America, which dissolved in 1841.

From the mid to late 19th century, Guatemala experienced chronic instability and civil strife. Beginning in the early 20th century, it was ruled by a series of dictators backed by the United Fruit Company and the United States government. In 1944, authoritarian leader Jorge Ubico was overthrown by a pro-democratic military coup, initiating a decade-long revolution that led to sweeping social and economic reforms. A U.S.-backed military coup in 1954 ended the revolution and installed a dictatorship.

From 1960 to 1996, Guatemala endured a bloody civil war fought between the U.S.-backed government and leftist rebels, which included massacres of the Mayan population perpetrated by the military. Since a United Nations-negotiated peace accord, Guatemala has witnessed both economic growth and successful democratic elections, though it continues to struggle with high rates of poverty, crime, drug trade, and instability.

Guatemala’s abundance of biologically significant and unique ecosystems, which includes a large number of endemic species, contributes to Mesoamerica’s designation as a biodiversity hotspot.[8] The country is also known for its rich and distinct culture, which is characterized by a fusion of Spanish and Indigenous influences.

Guatemala is the largest economy in Central America, with a GDP (PPP) per capita of US$5,200. Guatemala faces many social problems and is one of the poorest countries in Latin America. The distribution of income is highly unequal with more than half of the population below the national poverty line and just over 400,000 (3.2%) unemployed. The CIA World Fact Book considers 54.0% of the population of Guatemala to be living in poverty.

In 2010, the Guatemalan economy grew by 3%, recovering gradually from the 2009 crisis, as a result of the falling demands from the United States and others Central American markets and the slowdown in foreign investment in the middle of the global recession.

Remittances from Guatemalans living in United States now constitutes the largest single source of foreign income (two thirds of exports and one tenth of GDP).

Some of Guatemala’s main exports are fruits, vegetables, flowers, handicrafts, cloths and others. In the face of a rising demand for biofuels, the country is growing and exporting an increasing amount of raw materials for biofuel production, especially sugar cane and palm oil. Critics say that this development leads to higher prices of staple foods like corn, a major ingredient in the Guatemalan diet. As a consequence of the subsidization of US American corn, Guatemala imports nearly half of its corn from the United States that is using 40 percent of its crop harvest for biofuel production. The government is considering ways to legalize poppy and marijuana production, hoping to tax production and use tax revenues to fund drug prevention programs and other social projects.

Gross Domestic Product (GDP) in purchasing power parity (PPP) in 2010 was estimated at $70.15 billion USD. The service sector is the largest component of GDP at 63%, followed by the industry sector at 23.8% and the agriculture sector at 13.2% (2010 est.). Mines produce gold, silver, zinc, cobalt and nickel. The agricultural sector accounts for about two-fifths of exports, and half of the labor force. Organic coffee, sugar, textiles, fresh vegetables, and bananas are the country’s main exports. Inflation was 3.9% in 2010.

Tourism has become one of the main drivers of the economy, with tourism worth $1.8 billion to the economy in 2008. Guatemala received about two million tourists annually. In recent years an increased number of cruise ships have visited Guatemalan seaports, leading to more tourists visiting the country.

In its territory there are fascinating Mayan archaeological sites (Tikal in the Peten, Quiriguá in Izabal, Iximche in Tecpan Chimaltenango and Guatemala City). As natural beauty destinations is Lake Atitlan and Semuc Champey. As historical tourism is the colonial city of Antigua Guatemala, which is recognized by UNESCO Cultural Heritage.

There is a strong interest of the international community for archaeological sites like the city of Tikal was built and inhabited in a period where the culture had its most literal and artistic expression, was ruled by a dynasty of 16 kings, the Maya of Tikal built many temples, a ball park, altars and steles in high and low relief.

Guatemala is very popular for its archaeological sites, pre-Hispanic cities as well as tourist-religious centers like the Basilica of Esquipulas in the city of Esquipulas and the beautiful beaches on the Pacific and Atlantic coasts of Guatemala. Other tourist destinations are the national parks and other protected areas such as the Maya Biosphere Reserve

Christianity continues to remain strong and vital for the life of Guatemalan society, but its composition has changed over generations of social and political unrest. Roman Catholicism, introduced by the Spanish during the colonial era, remains the dominant sect, accounting for 48.4% of the population as of 2007. Protestants make up 33.7% of the population, followed by 1.6% in other religions (such as Judaism, Islam, and Buddhism), and 16.1% claiming no religious affiliation. A more recent 2012 survey reveals Catholics at 47.6%, Protestants at 38.2%, other religions at 2.6%, and the non-religious at 11.6%.