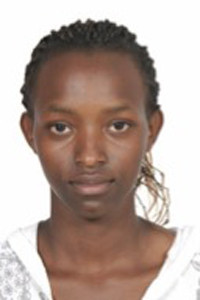 When Naomi Muthoni Mwangi was twelve, violence erupted across her country, Kenya, following the disputed presidential elections of December, 2007. Nearly 664,000 people fled their homes during two months of intense inter-ethnic violence which cost 1,300 lives and displaced close to 650,000 Kenyans. Naomi and her family fled Kisumu, where they had been living, and took refuge in in one of 118 camps that 350,000 internally displaced people (IDPs) fled to during that time. Now 19, she still lives in that community, the Vumilia camp of Maai Mahiu IDP, along with her parents and her four brothers.

In 2010, Naomi joined Rafiki Link, a program offered to young residents of Maai Mahiu IDP by the nonprofit organization Comfort the Children (CTC). Rafiki (Friend) Link builds authentic global connections and understanding by directly linking schools around the world with primary and secondary schools in Maai Mahiu. Youth engage in meaningful, curriculum-based interactions such as essay contests, art exchanges, and a video talent show which consequently teach them how to use a computer, email, and collaborate with fellow students around the world.

As a result of her involvement with Rafiki Link and having earned an award for the Best Essay on Peace in her school, Naomi was selected to attend the Amala Foundation’s 2012 Global Youth Peace Summit in Austin, Texas, United States. Having had the opportunity to interact with young people from 28 different countries at the summit, Naomi came away with a new understanding of the power of forgiveness and speaking from the heart.

“Nothing is impossible; being one’s self is possible,” says Naomi. “Rather than strictly doing and achieving, it is important to be willing to undo, to unravel, to return home to your true self. Many people fear to speak out, thinking they are alone, facing heavy burdens, but once you speak, the fear and pain in you vanishes. Speaking from your heart is the medicine to your freedom.”

Back in Kenya, Naomi is helping her family and friends learn to forgive much of what has happened to them in order to move forward. She has become a peace leader both at school and in the camp, stressing the importance of peace within and with those in your immediate circle for a wider, more sustainable peace. Naomi is the sister of fellow Chime In Ambassador, Jeremiah Mwangi.